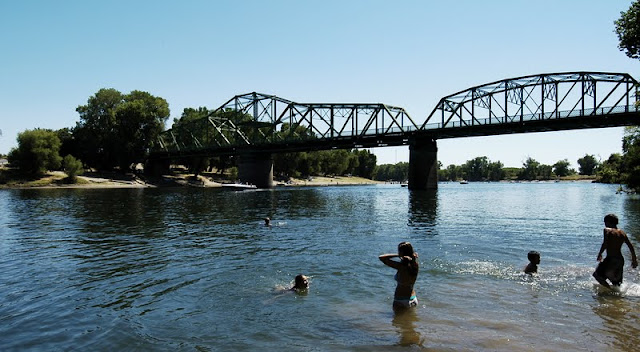 The American River empties into the Sacramento River just west of the Jibboom Street Bridge. There are many other rivers in Northern California that flow out of the Sierra Nevada Mountains into the Sacramento River. However, since much of the American River is whitewater rapids it's hard to understand why a movable bridge crosses it. Perhaps that's why the swing mechanism hasn't worked in many years. The bridge sits on a huge, cylindrical pivot pier and the two ends rest on piers that also support Parker truss spans. As I mentioned before, swing bridges are hardly ever built and are slowly being removed from waterways. The big exception is the previously studied Spokane Street Bridge in Seattle (shown on the April 29th and 30th blogs), which is huge, with the piers built outside the channel, and has won several design awards.