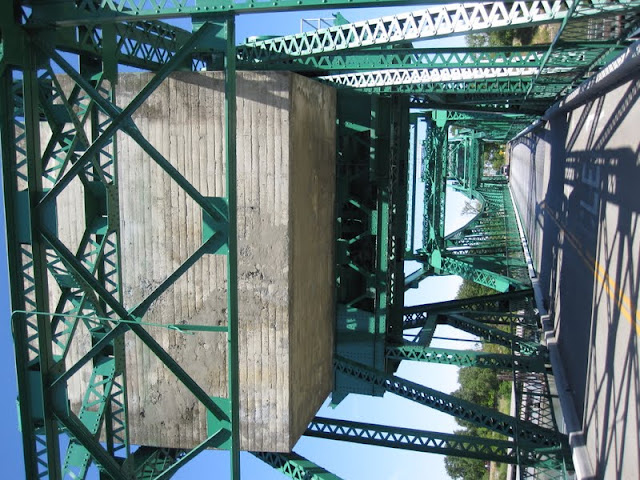 Just south of Sacramento in the tiny town of Freeport is another bascule bridge across the Sacramento River. It's nearly identical to the Paintersville Bridge, only painted green instead of yellow.

The Freeport Bridge was built in 1930 and carries traffic between SR160 on the east side of the river and SR E9 on the west side. It has more elaborate fenders protecting the piers on each side of the 200 ft channel opening, perhaps because it sits next to a dock lined with weekend pleasure craft.

The spaces around the huge counterweights are so tight, that its remarkable that the truss members never get hit as the weights swing past. There must a large industry of mechanics and engineers whose job is to constantly maintain these massive machines. Movable bridges are much more dangerous than fixed structures. Every year people in a hurry or who aren't paying sufficient attention die while trying to cross a bridge that is moving or open.  There's hundreds of these bridges in California and thousands of them in the U.S. However, my feeling is that it's cheaper to build a long tall bridge over a river, rather than to put up with all the problems of owning a movable bridge.

We'll take one more look at the Freeport Bridge tomorrow and then continue up river into the City of Sacramento and beyond to study a few more movable bridges.