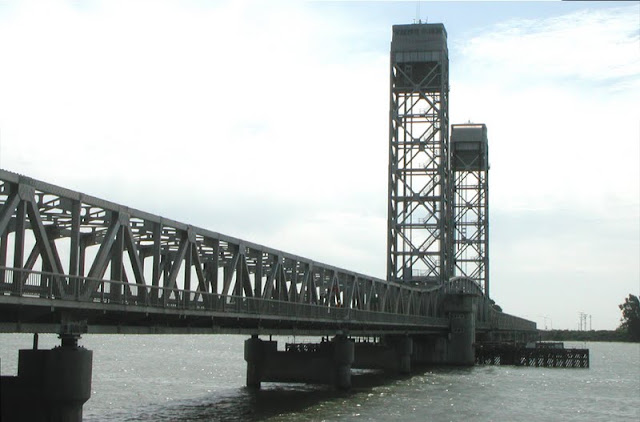 A view of the Rio Vista Bridge in the closed position. The bridge consists of two long truss approaches and a vertical lift span (for tall ships traveling on the Sacramento River). Despite the fenders surrounding the towers, the bridge is occasionally hit by ships, especially in the winter when the Tule Fog blankets the valley. An Italian freighter once knocked out an approach span on it's way to the Port of Sacramento.

I find it irritating that the San Francisco Chronicle uses Caltrans as a scapegoat whenever a ship collides with one of our bridges. They claim that the resulting oil spill is due to Caltrans not employing enough collision protection  on our bridges. I don't think there is any protection if a large vessel is traveling over 10 knots.

This bridge got a seismic retrofit in the 1990s. I think that most bridges were retrofitted in the closed position since they are only opened a few times a day (the opposite for railroad bridges). This retrofit employed lead rubber bearings for the approaches and viscous dampers at the towers (in case the anchor bolts broke). I believe there was also something done to keep the counterweights from swinging into the towers during an earthquake.