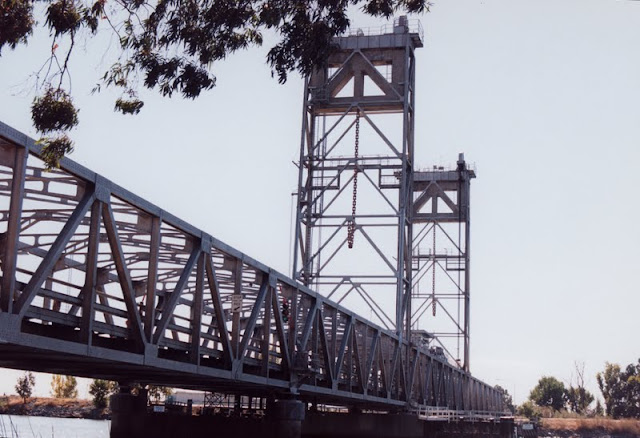 I found that I skipped an attractive vertical lift bridge on my march up the Sacramento River. I thought we might as well go back and take a look at it as a break from all the bascule bridges. Actually, I've learned quite a bit about bascule bridges by reading Movable Bridge Engineering by Terry L. Koglin. I think they are more complicated and interesting than the generally simpler lift and swing bridges, but still its nice to enjoy a change.

The Three Mile Slough Bridge is actually a little south of the Rio Vista Bridge, across one of the sloughs that twist and turn in California's Inland Delta. I imagine it's easy to get lost, even with a GPS device, when traveling by boat through the hundreds of islands.

At one time Three Mile Slough must have been an important waterway to have merited such a big bridge. Perhaps the slough is still used to carry ships and barges into Stockton. I like the counterweights with their unusual shapes. I also like the chains hanging from the counterweights, although I'm not sure what they're for. This bridge is much simpler than the Rio Vista Bridge with its parabolic-shaped top chord. It looks like the operator's house sits on top of the lift span!

The Three Mile Slough Bridge was built in 1949. It's 750 ft long and provides 105 ft of vertical clearance and 150 ft of channel width. Apparently the bridge is in poor shape although (or because) it carries about 1000 vehicles a day. It's a steel, vertical lift, through truss bridge with long approaches and a 175 ft long lift span.

I realized that the reason I see so few big ships on the Sacramento River these days is because they built a shipping channel just west of the river. The channel is straight and wide compared to the meandering Sacramento River.

I just wanted to add a little more about these bridges and the commercial traffic they handle.
Three Mile Slough provides a shortcut to commercial traffic (mainly tugs and barges) traveling between Stockton and Sacramento. Consequently, this bridge opens relatively often, from what I understand.
The Rio Vista Bridge also sees commercial traffic--tugs with barges, and even some big ships (bulk carrier freighters). A bulk carrier ship heading from SF Bay to Sac would travel thru the Carquinez Strait and up the Sacramento River a few miles north of Rio Vista. At that point, it would turn off the Sacramento River proper, and follow a slough for a short stretch which provides the connection to the Sacramento Deep Water Ship Channel. The rest of the way to Sac, it would use the Deep Water Ship Channel--which is a man-made canal that provides much deeper water than the Sacramento River, allowing large ships to make it all the way up to Sac. It has 30 feet of depth, enough for small and perhaps medium size freighters, and is 43 miles long (source for these numbers: Wikipedia).
The Sacramento River itself, north of where the Deep Water Ship Channel splits off, is used primarily by recreational boaters. It's just not deep enough for big ships, and too curvy and meandering for tugs with barges. Consequently, there isn't a need for 24 bridge operation, as Rich suggests.
Thank you very much for the wonderful pictures and explanations of these great bridges. A true joy for anyone who has spent time on the water.