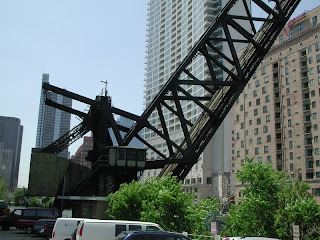 Looking at the Kinzie Street Railroad Bridge from the side, we can see that the large concrete counterweight isn't hidden in a pit like the bridges around Wacker Drive. Apparently aesthetics isn't as big of a concern on the North Chicago River. Still, its a Chicago landmark, so the community must like this big, ugly structure.  We can see two sets of tracks on the through truss deck, and a crummy little operator's house instead of the exquisite tender houses along Wacker Drive.

There's a lot of laced members on this bridge which were popular during the turn of the 19th century although today they need to be replaced with something more ductile in earthquake regions. The raised span is 170-foot long (tall?) and is supported on the east trunnion pier. According to Wikepedia, it was constructed on foundations 94 feet down into bedrock. A caisson was built to a depth of 29 feet below the river bed and then holes were drilled that eventually caused the caisson to drop the remaining 65 feet. I guess that's why the bridge is still around 100 years later, although it is now functionally obsolete.