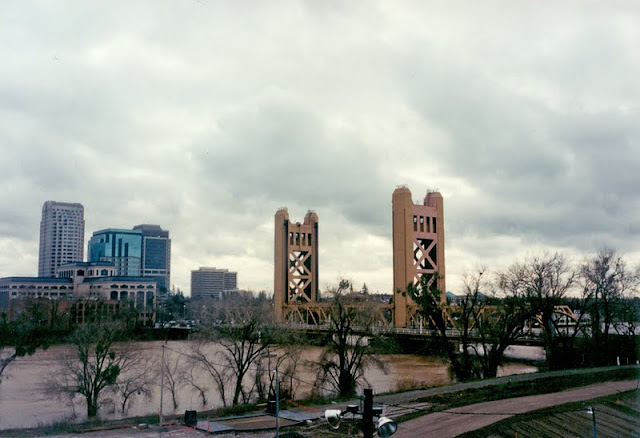 I hope that readers expecting to see a Thames River bridge aren't too disappointed. This Tower Bridge is often used as the symbol of Sacramento, which is the capitol of California. However, the towers aren't as architecturally splendid, perhaps because it's too far from Hollywood (and Disneyland).

For some reason, there has been a continuing controversy about the color of this bridge. It was originally silver, but people complained of the glare and it was repainted yellow, which people found dull. Voters got to pick its current color which was meant to be gold but some think is still too dull.

This is the third vertical lift bridge we've looked at on the Sacramento River. It's one movable bridge that is still fairly active. It has 131 ft of vertical clearance and 170 ft of lateral clearance when it's open. It was the first vertical lift bridge in California (built in 1931) and an early example of the 'high-tech' look in engineering (similar to the George Washington Bridge over the Hudson). We'll take another look at this bridge tomorrow.

Posted by Mark Yashinsky at 1:55 AM