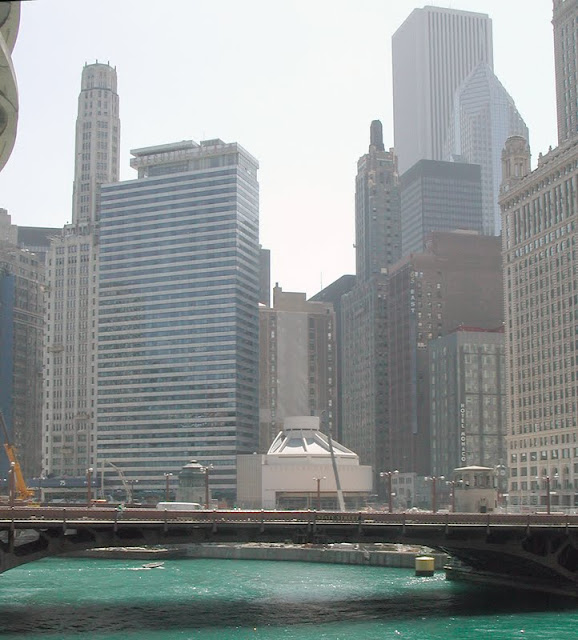 The Chicago River was an important waterway long before there was a city along the southwest shore of Lake Michigan. People in the northeastern United States could go from the Great Lakes onto the Chicago River and travel all the way to the Mississippi River.

Today the river cuts a narrow swath through the skyscrapers of downtown Chicago. There are eighteen bascule bridges crossing the river along Wacker Drive. These bridges are dwarfed by the surrounding buildings.   Most of the bridges were built in the early 20th century at the height of the City Beautiful Movement. It was felt that vertical lift and swing bridges weren't attractive enough for the architectural milieu.

The devices that control the movement of bascule bridges are often patented, and so the Chicago DOT engineers developed their own machines to lift the bridge spans. These bascule bridges have through truss, deck truss, and double-deck truss superstructures, but they all use counterweights in pits, architect-designed tender houses, and other recognizable features.

The North State Street Bridge is the fifth bridge across the Chicago River west of Lake Michigan. It provides a clear span of 210 ft and an extremely wide 108 ft that includes six traffic lanes and two sidewalks. Its a deck truss (the truss penetrate the deck as bridge railings) that was built in 1949, although there has been a movable bridge at this site since 1864.