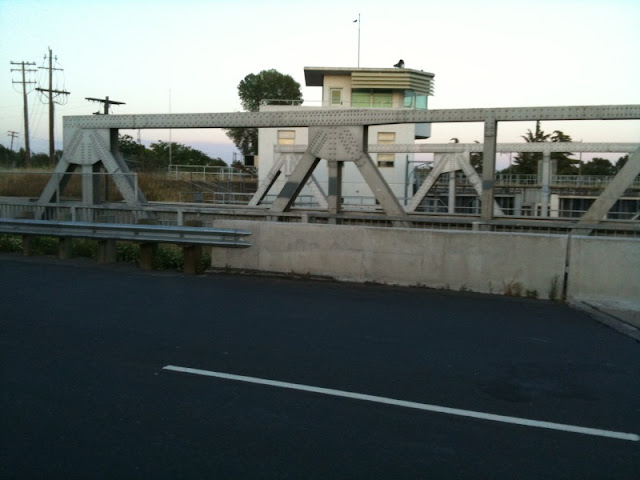 The next movable bridge upstream along the Sacramento River was supposed to be the Jefferson Boulevard Bridge over the Sacramento Deep Water Shipping Channel. The book Movable Bridge Engineering said it was a bascule highway and railway bridge built by the US Army Corps of Engineers in 1961.  However, when I rode my bike to West Sacramento, all I could find was an operator's tower (probably for the nearby floodgates), a pony truss highway and railroad bridge, and a new precast I-girder bridge.

The city of West Sacramento has been spending a lot of money on infrastructure, including the Palamidessi Bridge and Overhead (barely seen in the distance) and improving the crossing at Jefferson Boulevard to four highway lanes and a pair of railway tracks (the crossings are called the Sacramento Deep Water Canal Bridges). West Sacramento used to be empty land and industrial parks, but now there are subdivisions on both sides of the canal.