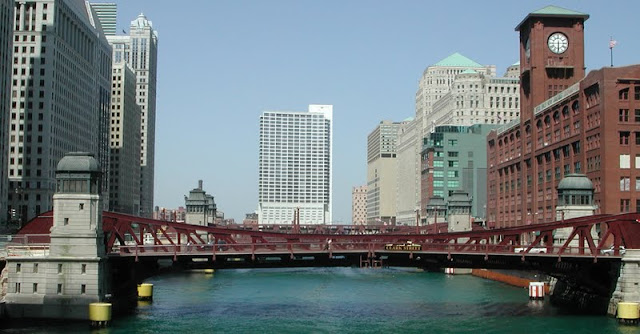 The next bridge I photographed was at Clark Street. It was always the main north-south route through town and so a floating timber bridge was built at this location across the Chicago River in 1840. It was destroyed by a flood in 1849 and replaced with a timber swing bridge in 1854. The Great Fire of 1871 destroyed all the bridges across the Chicago River but they were rebuilt the following year.

The North Clark Street Bridge was the last of the swing bridges that were replaced in downtown across the Chicago River (by a pony truss bridge in 1929) . It has a clear span of 215 ft, a width of 72 ft, and each leaf weighs 2800 kips.

Today, these bridges are only opened about 40 times a year. Note how the trusses becomes deeper at their ends to support the counterweights as they rotate into the pits behind each tender house. The North Clark Street Bridge was rebuilt many times, with the last rehabilitation in 1985.