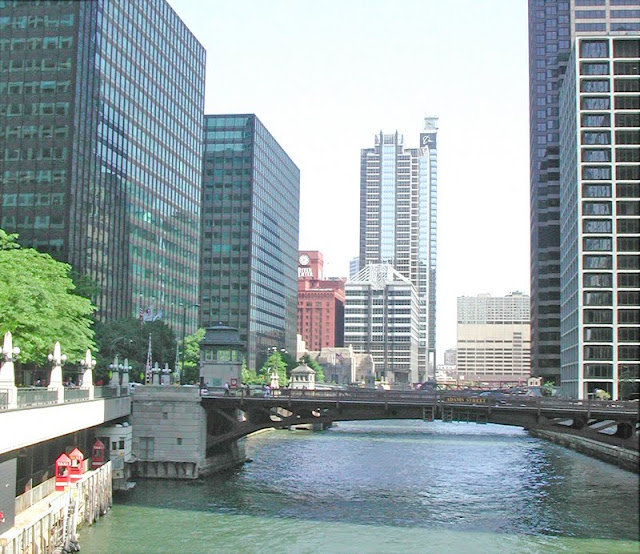 Chicago is such a great looking city, that I seem to be having trouble focusing on the bridges instead of the surrounding buildings. We are quite a bit farther down the South Branch of the Chicago River now, just a couple of blocks from the Sears Tower (now the Willis Tower), which is sadly the tallest building in the U.S. since the destruction of the World Trade Center Towers.

The West Adams Street Bridge is a deck truss double leaf bascule bridge with a 173 ft clear span and a 64 ft width, making it one of the smaller bridges across the Chicago River. Like all the other bridges, it has pits on the two ends to keep the counterweights out of sight (and out of the way). Comparing these Chicago River bridges with the previously studied heel trunnion bascule bridges across the Sacramento River shows how much cleaner the bridge's appearance is when the counterweights are concealed.

I wonder if Prof. Billington at the University of Princeton would prefer the Sacramento River bridges where we get to see the structure that opens and closes the bridge?

I've been wanting to mention that most of the information on these bridges is from James S Phillips who wrote an excellent history of these bridges, which I purchased for only $3.75, a real bargain! I like the idea that you can write a book, post it on the Internet, and sell it without the need for a publisher, distributors, etc.