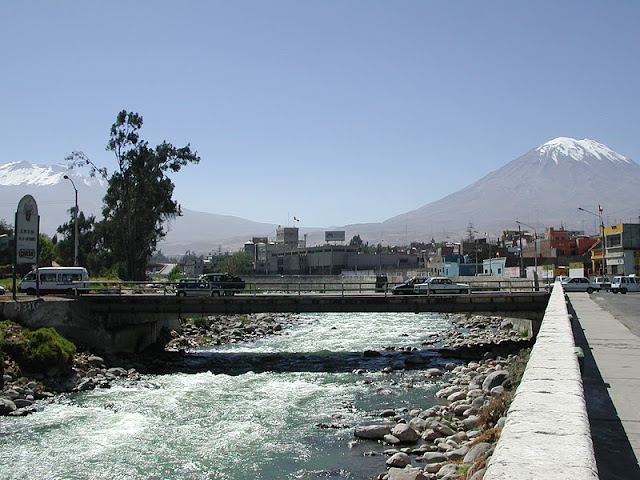 Between Puente Bolivar and Puente Quinones is Puente San Martin. I decided to show this bridge, not because it is particularly interesting, but because two of the volcanoes that surround Arequipa are in the photo.

On the right is Volcan Misti with a conical shape as fine as Mt. Fuji. On the left is the Nevado Chachani Volcano with a complicated structure that includes several domes. Both volcanoes are about 6000 meters tall. Neither have erupted in a long time, but both are considered active.

San Martin is a single span, reinforced concrete, haunched girder bridge carrying two lanes of traffic. If you look closely, you can see a water main being carried along the exterior girder, which ruins the appearance of the haunched girder.

Jose de San Martin was an Argentine general who helped liberate (along with Simon Bolivar) South America from Spain. San Martin Road goes east from Freedom of Expression Park (Parque Libertad de Expresion) across the Rio Chili, across La Marina Blvd, around Martinez Circle (Ovalo Martinez), to the Southern Institute (Instituto del Sur). Arequipa is called the 'White City' because of all the white rock that has been quarried from the surrounding mountains for churches and government buildings.

The Rio Chili is crossed by a variety of interesting bridges from it's source in the Cordillera Occidental Mountain Range until it empties into the Pacific at the Valle de Quilca. Unfortunately, I've only photographed a few bridges in the city. Perhaps one day, I can make a survey of all the interesting bridges in Peru or at least, all the bridges that cross the Rio Chili.