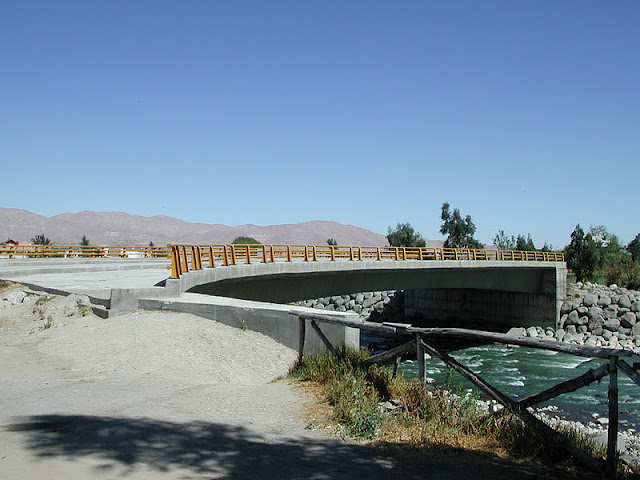 Its always interesting to study a new bridge. The Puente Rio Chili in Arequipa is a single span reinforced concrete box girder bridge with end-diaphragm abutments; basically a rigid frame. Note how the far abutment is only half covered in cobbles and has no wingwalls (it looks like they are about to be built) while the closer abutment is covered in sand and gravel with wingwalls extending along it's sides. Probably they were just completing the far abutment. There's a notch in the deck/backwall of the near abutment for an approach slab or roadway.

The bridge is about 200 ft long and 60 ft wide; a four lane bridge with a short median barrier cast in the middle and steel guardrails along the deck overhangs. Even at $50 per square foot, this bridge would have cost over half a million U. S. dollars. It looks like a modern highway bridge, but it doesn't connect to a major road or highway. There are just some farms and what looks like storage facilities on the other side of the river. It seems like a very expensive bridge just to be used by a farmer to bring his crops to market.