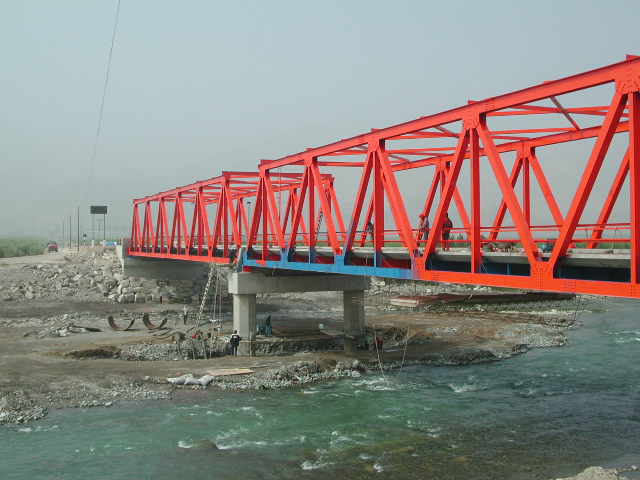 Puente Pampa Blanca (White Prairie Bridge) is a two span though truss on two column bents and seat-type abutments. Each span is 150 ft long and 30 ft wide. The bridge crosses the Rio Tambo about five miles north of Puente Freyne. It carries Route 18, which goes north, crosses the river, and then turns northeast along the east side of this fertile valley (see Google Map).

Using the language we've adopted from The Happy Pontist, this truss only has posts in the 'upward-pointing' triangles. In this photo you can see the floor beams supporting the deck at the bottom of each post and at the point of every 'downward-pointing' triangle. I believe the Happy Pontist explained that the additional posts we often see are there to provide lateral stability to the frame and are not needed when ample cross-bracing is provided to support the compression chord.

In the photo above, we can see that Puente Pampa Blanca was being completed when we visited the site in 2001. If I recall correctly, the only damage from the earthquake was to some steel bearings. I'm not sure why, but I don't find this bridge to be as elegant as Puente Freyne or Puente Rio Sihuas. Perhaps it's just the red paint.

Among the many excellent tools provided by Google (besides this easy-to-use blogging program) is an automatic Spanish to English translator that I've used for the many articles I've read on the bridges of Peru. Of course it's not perfect. Anyway, here is what an article said about the opening of the bridge after Google translated it.

Pampa Blanca Bridge integrated into development. In an emotional popular act was attended by the Minister of Transport and Communications Engineer Luis Chang Reyes, l 29, was inaugurated last September Pampa White Bridge in distritro Cocachacra, an old dream coming true of the whole Province.
Bridge construction Pampa Blanca, whose cost exceeds five million suns, has been executed pursuant to an agreement signed between the private sector represented by the companies Terminal Internacional del Sur Tisure S. A. Central and S. Sugar Chucarapi A. whose combined economic contribution to the contributions of the Provincial Municipality of Islay Municpalidad Deistrital of Cochchacra and Ministry of Transport and Communications have made this work possible, as a clear indication that by entering into with private companies can accelerate the pace of our development.

Hopefully, some slight meaning has been retained. The bridge was made possible by funds provided by local governments and agricultural industries in the area. This ensured that their products could be quickly shipped to world markets. Note the green fertile valley that surround the river and the dry white cliffs on the edges of the satellite photo below. 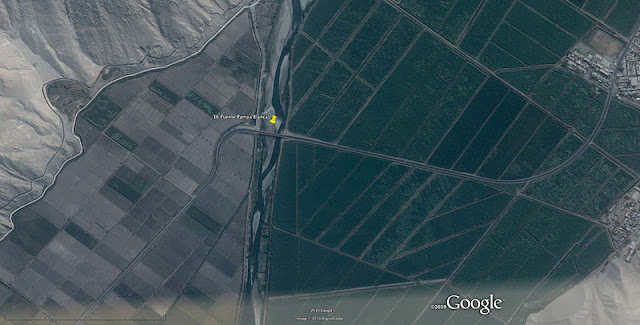