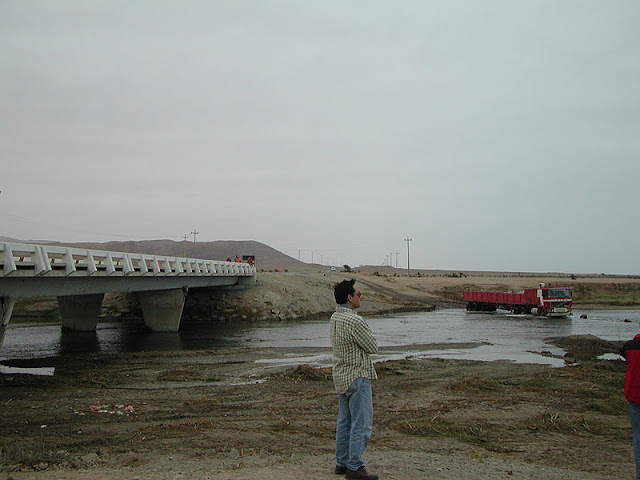 In the interest of completeness, I thought I would include a bridge across el Rio Sama, one of the southernmost rivers in Peru.
Unfortunately this photo was of a bridge that had been damaged during the 2001 earthquake. My notes say, "This is a three-span continuous RC box girder bridge supported on two-column bents and seat-type abutments. There were several structural details that made this bridge particularly vulnerable to shaking.  The lack of a wingwall behind the abutments allowed the embankment material to move away reducing the stiffness and damping of the bridge. The tops of the abutments were pushed back by the superstructure exposing the piles.  Because the abutments had lost their stiffness, the earthquake demand had to be taken by the two-column bents.  However, the bents had no top cap and so there was no frame action between the columns to stiffen them.  As a result, there was damage to the abutments and bents.  The soil at this location was also a problem, being very loose and unconsolidated.  During the earthquake, the soil on the south-side of the bridge laterally spread toward the river, breaking a quaywall."
As can be seen in the photo, vehicles were fording the Sama River while the bridge was being repaired.