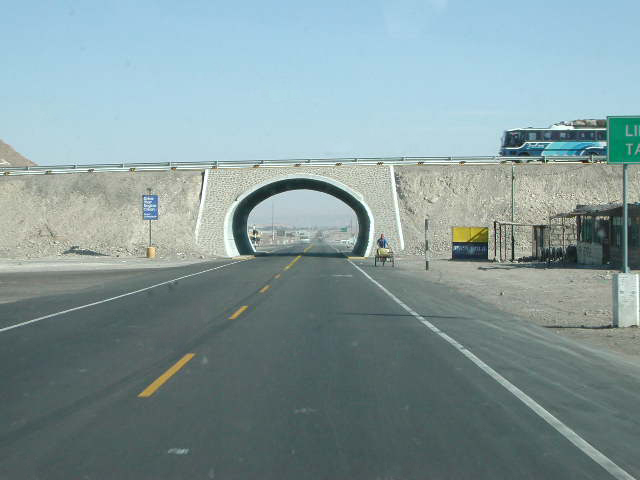 A low-resolution photo taken while leaving Arequipa. But what are we looking at?

We've often discussed whether it's cheaper to build a long trestle structure or a long embankment. Its amazing that an embankment with such steep sides (as shown in the photo) can support a roadway.

I was looking at the book Bridges, Canals, & Tunnels. They showed a 450 ft long timber trestle railroad bridge near Promontory Point, Utah.  It was so flimsy that they covered it with earth after it was built. However, I don't think this embankment has a timber structure underneath.

So is this structure a culvert, a tunnel, or a bridge? I would argue that it is a single span, filled spandrel arch bridge built to allow a grade separation between two highways.

I'd call that a bridge too. In the UK, I think a structure needs to be 150m wide before the standards start referring to it as a tunnel - this is driven by evacuation and ventilation requirements, not by anything structural. I have on several occasions debated with geotechnical engineers who is best placed to design what they would call "cut-and-cover tunnels", or what I would just call "a very wide bridge".

Wrong! It is a brunnel! Of course it could also be a brivert...