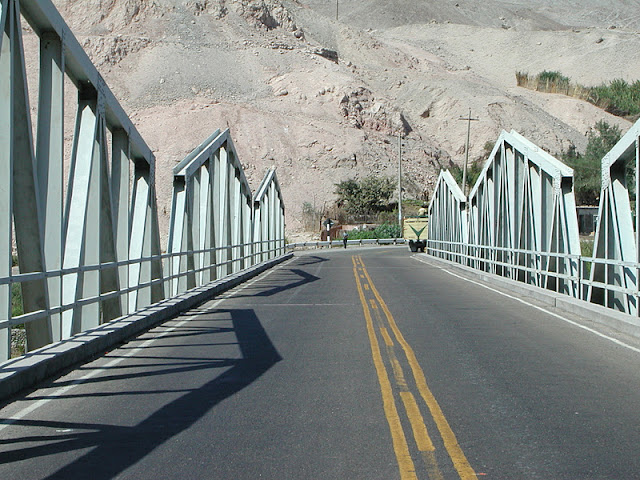 One last look at the Puente Rio Sihuas. I did a little investigating to determine what kind of truss this is. The always reliable Bridgehunter shows a similar bridge in Wyoming (the New Fork River Bridge), which he calls a Kingpost pony truss. However, that bridge had only a single floor beam at midspan while this bridge has a floor beam under every vertical member. I wonder if that makes a difference?

In both Ecuador and Peru, there has been conflict between the mestizos (mixed European and native) and the indigena (native) populations. For a while, there was a war between Shining Path guerrillas and the government of Peru. I saw a documentary on PBS about the Institute for Liberty and Democracy (ILD) that caused a real revolution in the lives of poor people in Peru by giving legal rights (especially for land ownership) to farmers who didn't own the land they lived and worked on.

There's a nice movie, The Motorcycle Diaries (Diarios de motocicleta) about a young Che Guevara taking a motorcycle trip across Latin America and discovering the poverty of the indigena. My feeling is that providing legal rights, sources of capital, and more transportation alternatives (bridges) for poor people may do more to lift them out of poverty than armed revolution.