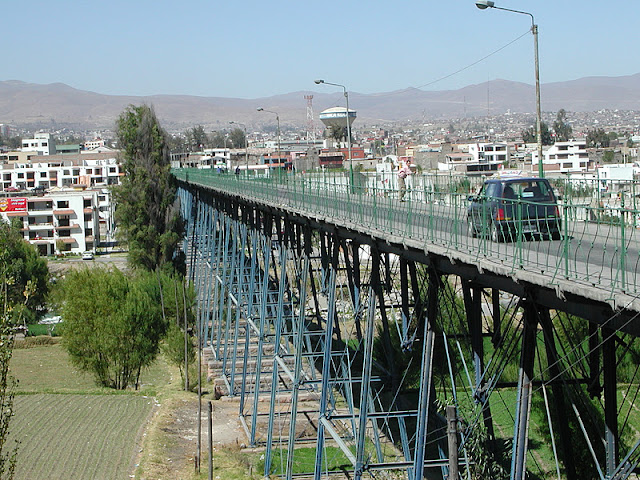 One last photo of Puente Bolivar. There's something strange about such a long viaduct that carries only a single lane of traffic. It's as if each car was a tiny train on its long trip above the valley floor.

Perhaps the City of Arequipa just needed an excuse to keep the bridge in service. There are alternative routes half a mile to the north and south. Also, there are wide sidewalks on both sides of the deck, so the bridge's main purpose may be as a pedestrian overcrossing.

I was looking through the blogs and websites for information about Puente Bolivar and I found a comment from a Peruvian that Gustave Eiffel hadn't really designed this bridge. According to the writer, an architect had done some research and it was just a myth!

Based on its appearance, I find it hard to say whether Puente Bolivar is the work of Gustave Eiffel. Ponte Maria Pia and the Garabit Viaduct are magnificent structures that look like the Eiffel Tower turned into bridges (see David Billington's The Tower and The Bridge). They don't seem to have anything in common with this rather plain structure. Ponte Internationale and the Rouzat Viaduct have interesting superstructures rather than the rather plain triangular truss elements on Puente Bolivar. Still, there is something evocative of Eiffel in this structure. I just don't think it's one of his major works.