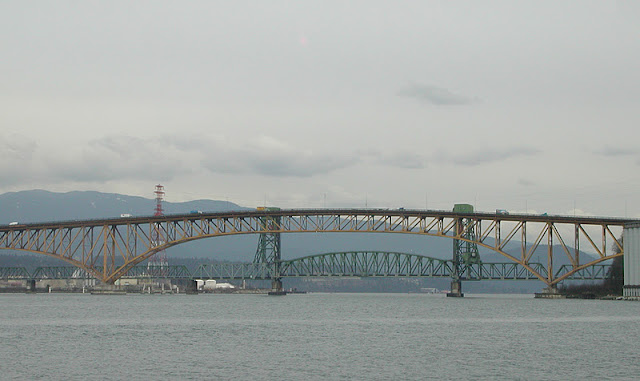 Burrard Inlet is well protected and makes an excellent shipping channel and port for the City of Vancouver. It runs east for 25 miles and it's connected to the north by the Indian Arm Fjord, where it makes a rapid transition from city to wilderness.

The First Narrows is formed by a peninsula jutting into the mouth of Burrard Inlet and it's crossed by the Lion's Gate Bridge. The Second Narrows is about five miles to the east and is crossed by two bridges. Plans to build a bridge across the Second Narrows began with the Klondike Gold Rush at the end of the 19th century. However, it wasn't until after WWI that money became available to carry goods from the north into the Port of Vancouver.

The first bridge to cross the Second Narrows was built in 1925 as a vehicle bridge but also began carrying trains a year later. It suffered so many ship collisions that the center span was replaced with a lift span in 1933. A second bridge was added to the west in 1960. It was much taller and carried six lanes of highway traffic and so the original bridge was converted exclusively to train traffic. This railroad bridge was replaced in 1969 with a wider and taller steel truss lift bridge owned and maintained by the Canadian National Railway.

The highway bridge was renamed the Ironworkers Memorial Second Narrows Crossing in 1994 to honor the many workers who died while building the bridge. A span collapsed during construction throwing 79 workers into Burrard Inlet. Eighteen ironworkers died as well as a diver who was searching for the bodies. A Royal Commission found the accident was caused by a miscalculation of the strength of a temporary support by the bridge designers. There were three other accidents resulting in a total of 25 deaths during the construction of this bridge,

The highway bridge is a steel, cantilever truss with a 335 m (1100 ft) main span and 142 m (466 ft) long side spans. The total length is 1292 m (4242 ft), which includes several approach spans. The center span was cantilevered out from the two piers and cranes placed a dropped-in span in the middle. The bridge was designed by Swan Wooster and Partners who had also built the Lion's Gate Bridge. It is owned and maintained by the British Columbia Ministry of Transportation. It carries pedestrians, cyclists, and six lanes of Highway 1 traffic. Because there are weight restrictions on the Lion's Gate Bridge, this bridge gets most of the truck traffic across the Inlet. Like the Lion's Gate Bridge, it was recently seismically retrofitted and re-decked.