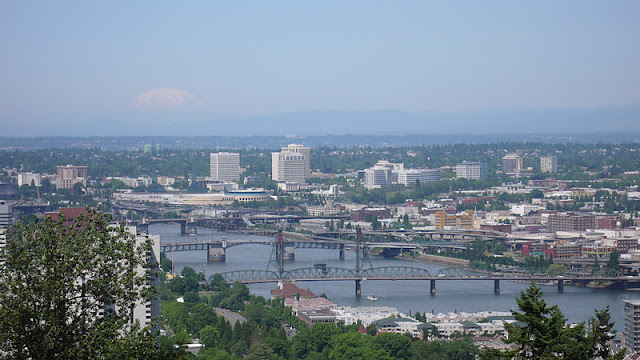 This photo was taken from the Oregon Health and Science University (OHSU) on a hill west of the Willamette River. You take the Portland Tram up to the University Hospital.  I wondered how they handled emergencies, especially if the tram were to lose power, but apparently they have adequate back-up systems. In the foreground are three moveable bridges and above the horizon is Mount St. Helens, which was cone shaped before it erupted in 1980.

We studied the Burnside Bascule Bridge yesterday. The Morrison Bridge is also a bascule bridge, which means the center leaf spans meet at midspan and swing up and down with the help of motors and counterweights (behind the pivot point). The Hawthorne Bridge is the oldest vertical lift bridge still in operation in the United States. We will take a closer look at these two bridges in the next few days.

Portland's Bridges: Burnside, Morrison, and Hawthorne Bridges by Mark Yashinsky is licensed under a Creative Commons Attribution-NonCommercial-ShareAlike 3.0 United States License.
Posted by Mark Yashinsky at 12:43 AM