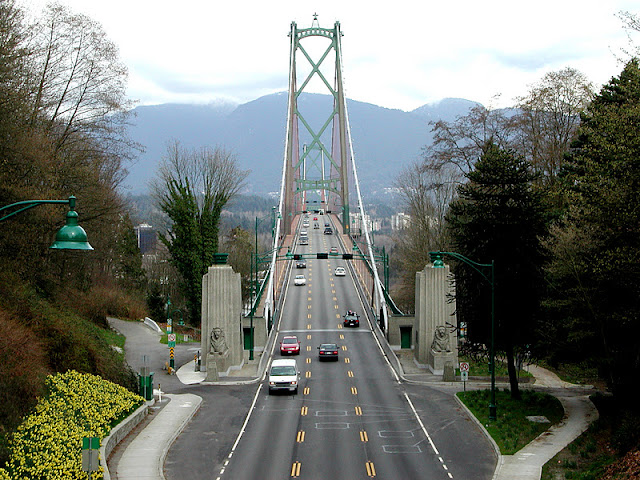 We are leaving Oregon for a while to look at bridges around Vancouver, British Columbia. The city is across the Strait of Georgia from Vancouver Island and about 20 miles north of the U.S. It's a pretty, very cosmopolitan city with a lot of interesting bridges.

At the north end of the city, crossing the first narrows of Burrard Inlet (the second narrows is a little to the east) is the Lion's Gate Bridge. The bridge was named after two mountain peaks north of the city that are represented by two stone lions that sit at the southern entrance to the bridge. My photo is an often seen view taken from a bridge crossing Highway 99/1A.

From time to time, different groups proposed building a bridge across the narrows but the voters always rejected it until lost jobs during the Great Depression proved to be sufficient inducement for a big public works project. The project developer and bridge owner was the Guinness family. The bridge was designed by Monsarrat and Pratley of Montreal and built by the Swan Wooster Engineering Company as well as several other firms. Construction began in March 1937 and the bridge was opened in November 1938 at a cost of about $6 million Canadian dollars. The bridge was sold to the province in 1955 (at about the same cost) and tolls ceased in 1963.

The bridge was too narrow for the amount of traffic it carried but the City was reluctant to do anything that would increase traffic into downtown. Eventually (from 2000 to 2001) they replaced the deck, segment by segment, using nighttime and weekend closures. The existing deck was lowered onto a barge and a new deck segment put in it's place. The two walkways were moved to the outside of the suspension cables and the three vehicle lanes were widened from 3 to 3.6 m (10 to 12 ft).

The deck on the Golden Gate Bridge was replaced in a similar fashion in the 1980s. This is a good solution for a regular suspension bridge but it is difficult to replace the deck of tied arch bridges, cable stayed bridges, and self-anchored suspension bridges because the deck is loaded axially.