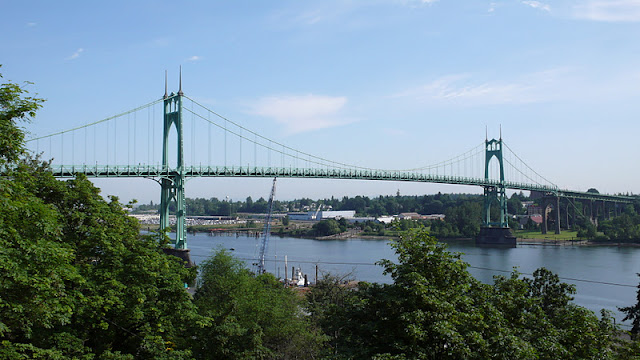 The Willamette River flows northward for 187 miles through northwestern Oregon and empties into the broad Columbia River. A little south of the Columbia is the City of Portland with the Willamette flowing through its center and crossed by many bridges. When I first heard the river's name, I assumed it was named after the British monarch William of Orange and was surprised that it's name derived from a Clackamas Indian village.
St. Johns Bridge is a highly ornamented suspension bridge that was built in 1931 about six miles upstream from the mouth of the Willamette River. It's hard to believe that the modern George Washington Bridge across the Hudson River was built in the very same year. However, Oregon bridges have a Gothic aesthetic far removed from the clean lines of bridges being built in New York. Its the tallest bridge in Portland with 408 ft tall towers and 205 ft vertical clearance over the river. We'll take a closer look at the bridge tomorrow.