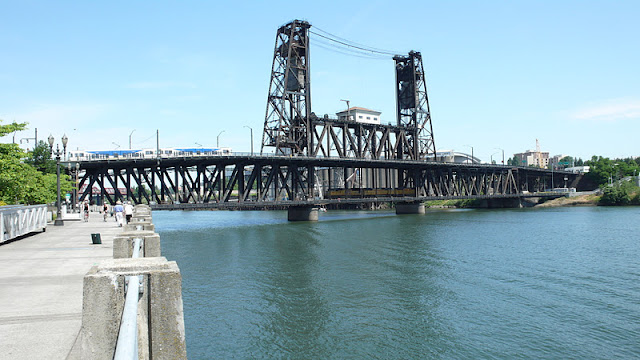 The Steel Bridge is also unusual for the variety of vehicles that it can accommodate on its two decks. In this photo we can see a light rail train traveling on the upper deck while three diesel locomotives are crossing on the lower deck. The average daily traffic includes 23000 trucks, buses, cars, and motorcycles, 200 light rail trains and trolleys, 40 freight and Amtrak trains, over 2000 bicycles, and uncounted pedestrians. It carries railroad, pedestrian, and bicycle traffic on the lower deck and highway, light rail, and streetcar traffic on its upper deck.

The Steel Bridge was designed by Waddel and Harrington (consultants from Kansas City) with support from the Oregon Railway and Navigation Company and the Union Pacific Railroad. The two railroad companies also built the bridge, which was completed in 1912. It replaced the previous Steel Bridge from 1888 that was so named because it had replaced an even earlier wrought iron bridge.

The Steel Bridge is composed of a 290 ft long steel Pratt truss on each side of the 211 ft long lift span. The superstructure is supported on short concrete piers on caisson foundations. Wikipedia has a nice website for this bridge that includes several drawings of the structure and the lift mechanism.