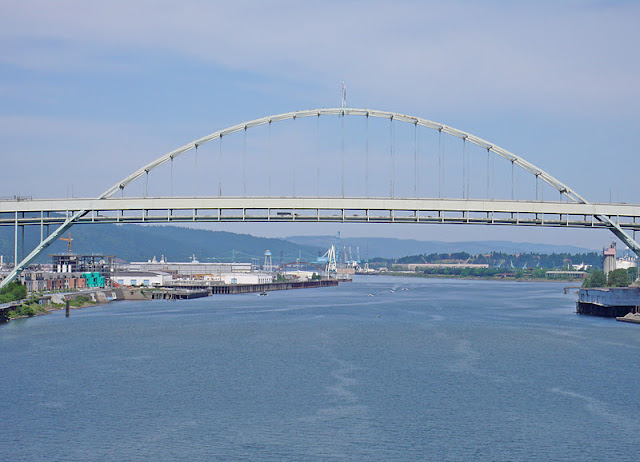 The Fremont Bridge crosses the Willamette River several miles upstream from St. Johns Suspension Bridge.
If you look closely at today's photo, you can see St. Johns Bridge under the Fremont Bridge. The Burlington Northern Railroad Bridge 5.1 sits between them, but I think it must be obscured by a bend in the river. It was originally a swing bridge that was converted to a vertical lift bridge in 1989.
We previously looked at the Fremont Bridge on February 17, 2009. Although these through arch bridges are often built as cantilever structures that are held back with towers and cables, the center span of this bridge was built in California, taken apart and reassembled at Swan Island. put on a barge for the 1.7 mile trip to the bridge site, and lifted onto the 'below-deck' part of the bridge.
The Fremont Bridge is a double-deck structure with four lanes of traffic in each direction. At 1255 ft it has the longest arch span in Oregon. We previously studied the Lupu Bridge in Shanghai which will shortly lose its title of having the longest arch span to the Chaotianmen Bridge (with a 5712 ft span), which is also in China.