Portland's Bridges: Bridge of the Gods 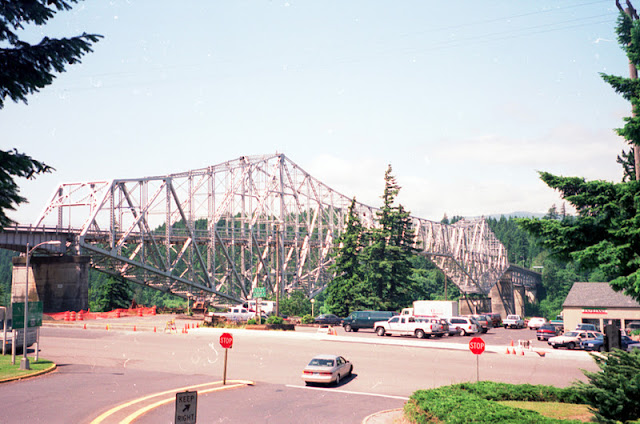 Yesterday we looked at bridges that evoke spiritual thoughts and so by coincidence (or by divine providence) our next river crossing is called the Bridge of the Gods. Its about 40 miles east of St. Johns Bridge across the Columbia River and behind Bonneville Dam.
Flying over the area on a day with low clouds can be a spectacular experience because Mt. Hood, Mt. Adams, Mt. St. Helens, and Mt. Ranier all stick their heads out of the clouds like huge gods. At least that's what Native American legend teaches. A thousand years ago, a land bridge crossed the Columbia River and these gods were fighting so violently, that the bridge was eventually destroyed. Like most legends, this story has more than a grain of truth. The constant volcanic eruptions and earthquakes in the area may well have destroyed the original Bridge of the Gods.
Today, a human-made bridge is where the Bridge of the Gods once stood. It's a steel, cantilever truss with a 706 ft main span. It was built in 1926 by the Wauna Toll Bridge Company of Walla Walla. It was originally 1127 ft in length, but after the dam was built, the bridge was raised and lengthened to 1856 ft to avoid the encroaching waters.
We'll take another look at this interesting structure tomorrow.