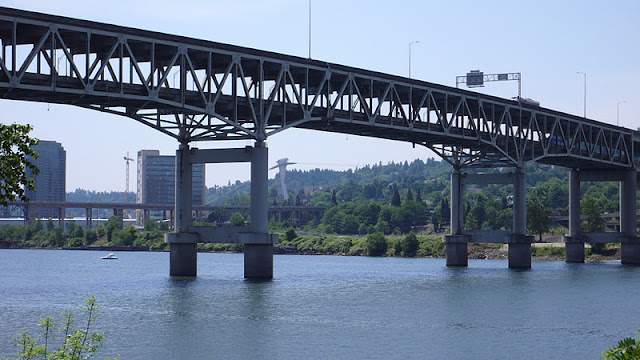 The Marquam Bridge is a double deck cantilever truss bridge that carries I-5 over the Willamette River. The main span is 440 ft long, the side spans are 301 ft long, and the deck is 57 ft wide. It carries four northbound lanes on the top deck and four southbound lanes on the bottom deck and provides 130 ft of vertical clearance over the river. The bridge was designed by the Oregon Dept. of Transportation (ODOT), the piers were built by Kiewit, and the superstructure was built by US Steel. It was opened in 1966 at a cost of $11 million.

This truss structure is connected to steel girder ramps including the beginning of one on the east side to connect to the Mount Hood Freeway, which was never built. The bridge was designed economically with little public input and it's considered to be an eyesore. I think it's a perfectly normal looking three span truss bridge, but for some reason it upsets Portland sensibilities. Perhaps it's because it carries 136,000 vehicles a day into and out of the city. In any event, there are committees that come up with various schemes for removing this bridge that are never acted upon.