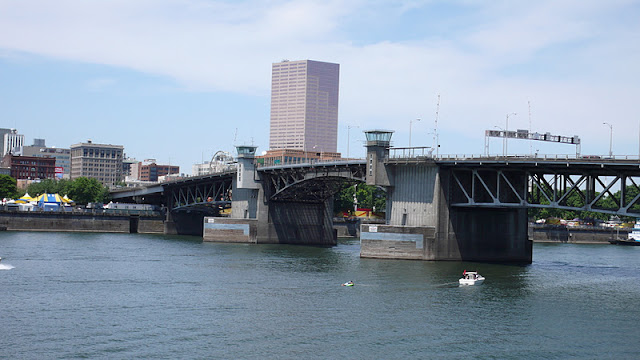 There have been three Morrison Bridges at this location. The first bridge was designed and built by Charles Swigert of the Pacific Bridge Company in 1887. It was a timber truss bridge with a steel swing span and it was the first bridge in Portland across the Willamette River. It survived the flood of 1894 which rose to the bridge's deck and damaged the motor and railing. It was replaced with a wrought iron and steel swing bridge in 1905. It had a timber deck and carried street cars but no automobiles.

The current Morrison Bridge was built in 1958 at a cost of $13 million. It included an elaborate interchange with ramps for the I-5 and the I-84 expressways. It's a double leaf bascule bridge, similar in appearance to the Burnside Bridge, but with an airport motif instead of medieval battlements. It was designed by Sverdrup of St. Louis and by Moffat and Nichol of Portland and built by the American Bridge Division of US Steel.

Large cofferdams were build for the two main piers. While the east cofferdam was being de-watered, several struts buckled from the increased stress but adjacent struts prevented collapse of the cofferdam. While the new bridge was being built, the east side of the existing bridge was moved to the south and continued carrying traffic. Because the second bridge was kept in service, the west side of the third bridge doesn't connect to Morrison Street.

The third Morrison bridge is 760 ft long, 90 ft wide, and with a  284 ft long double leaf bascule span. The deck of the bascule span was made of grated steel to reduce its weight. The bridge is the largest machine in Oregon with 36 ft tall gears driving the 940 US ton counterweights inside each pier. It carries 50,000 vehicles a day as well as bicycle and pedestrian traffic. Its scheduled for a seismic upgrade in the near future.