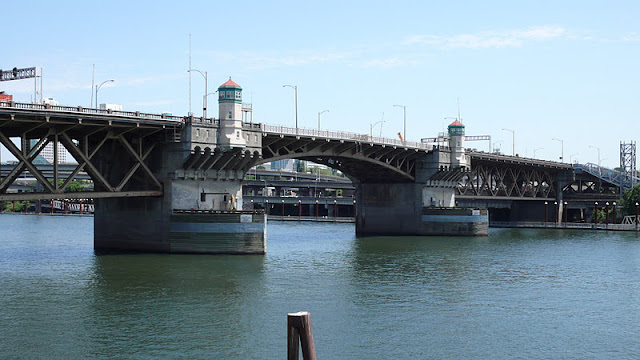 It is appropriate that a movable bridge was named after Dan Burnside since he was instrumental in  having the Willamette River dredged (in 1866) in order to make it a shipping channel. The original bridge at this site (built in 1894) was a swing bridge. When this bridge became outmoded because it was slow to open and close, it was replaced with a faster moving bascule bridge in 1926.

The double-leaf bascule span was designed by Joseph Strauss who later designed the Golden Gate Bridge. The design of the fixed spans was begun by Hedrick and Robert Kremers of Portland. It was completed by Gustav Linderthal after Robert was arrested for bribery and collusion. I don't know what it was like in Portland in the 1920s, but I know that in many places you can't get a bridge built without some bribery and collusion due to corrupt politics. The bridge was built by the Pacific Bridge Company.

The design of the Burnside Bridge included the services of Houghtaling and Dougan Architects of Portland who created a Disney fantasy similar to St. Johns Bridge. The main piers have octagonal towers attached to crenelated battlements that make the bridge resemble a medieval castle. This was part of the City Beautiful Movement that was initiated during the 1893 Chicago World's Fair, and which also influenced the design of several Los Angeles bridges.

One interesting peculiarity of the Burnside Bridge is that the bascule leafs were made of reinforced concrete which made them extremely heavy and required counterweights inside the two piers weighing 1700 US tons. Moreover, the lifting operation is controlled by the operator on the nearby Hawthorne Bridge.

The Burnside Bridge has a center span 251 ft in length that provides 64 ft of vertical clearance when it is closed. It has two 261 ft long steel truss approach spans and 34 steel girder spans for a total bridge length of 2308 ft. The bridge carried streetcars and electric trolleys until the 1950s. In 1995, one of the six vehicle lanes was converted to a bicycle path. In 2002 it became one of the first bridges in Portland to get a seismic retrofit. In 2007 the aging deck was replaced. Bridges are considered to have a 75 year life and the first thing to go is their decks which get a terrible beating, especially due to the heavier trucks currently using our roads.

This bridge provides shelter for an illegal skatepark under its east end. Politicians tend to allow these parks to exist even though the bridge owner now has liability for people using their right of way. In California, we tried to remove a skatepark in Oakland, because the construction of the park covers the bottom of the columns with concrete, which shortens the column's effective length and tends to make them fail in shear during earthquakes. However, the California politicians were more concerned with pleasing the local communities then worrying about an earthquake that might not occur for many years.