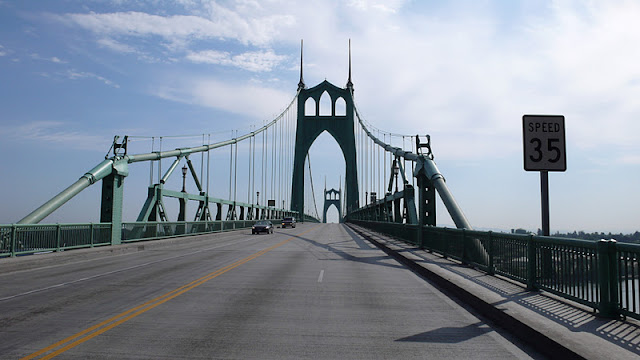 St. Johns Bridge was designed by David Steinman who had been an assistant to Gustav Linderthal on the 1917 Hell Gate Bridge (see blogs of July 20th and 21st). Those bridges were also designed with a concern for their appearance that was separate from their function. As a result of this excessive decorativeness, the bridge resembles a ride at Disneyland.
The bridge was built in the St Johns neighborhood of northern Portland, hence its name. It's the only suspension bridge in Portland and its completion ended ferry service across the Willamette River. The main span is 1207 ft long and its total length is 2067 ft. The suspension cables are composed of 91 - 1.5 inch diameter steel rope strands that were manufactured and pulled across the river by John A. Roebling and Sons Inc.
Multnomah County was reluctant to build a bridge so far from downtown Portland and so the local residents had to lobby hard to get the $4.25 million bond approved in the 1928 election. The Great Depression began soon after construction began and so the bridge served as secure employment for the region. Perhaps that explains why the bridge was $1 million under the budget when it was completed. It was originally owned by Multnomah County but by the 1970s the county couldn't afford to maintain the bridge and ownership was eventually transfered to the State of Oregon. From 2003 through 2005 the bridge was extensively renovated (at a cost of over $38 million).