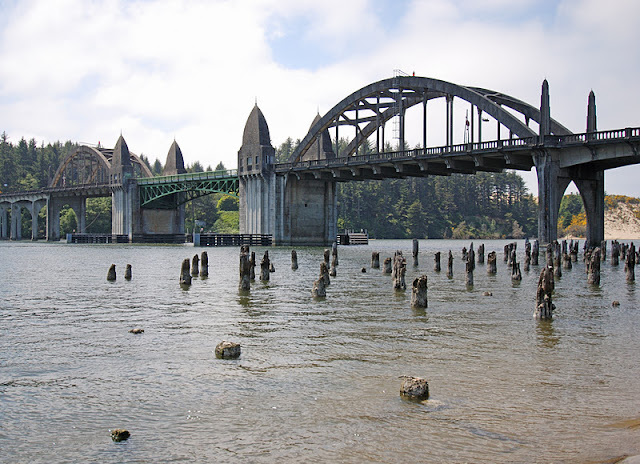 Continuing south along the Oregon coast is the city of Florence and the Siuslaw River Bridge. This is one of Conde McCullough's most ornate creations. A 140 ft long steel, bascule bridge was built between two 154 ft reinforced concrete bow string arches, which are connected to 20 concrete girder approach spans. Among the decorative features on this bridge are obelisks that support the movable span, pylons at the far ends of the arch spans, an ornamental railing, arch shaped two-column piers, X-bracing connecting the arch ribs, and haunched girders on the approach spans.

The Siuslaw Bridge has a total length of 1568 ft and it was built in 1936 by the Mercer-Fraser Company of Eureka, California. The bridge would be at the mouth of the Siuslaw River except there is a giant sandbar that makes it flow another four miles before it finds the Pacific. The city of Florence is on the north side of the river and has a population of about 8000 people. The economy used to be based on logging and fishing but now its mostly supported by tourism and by retired people moving into the area. Perhaps the movable bridge span was to allow the passage of boats loaded with timber from Oregon's interior.

We can see timber piles sticking out the river where a dock once stood. The river was crossed by a ferry before the bridge was built.