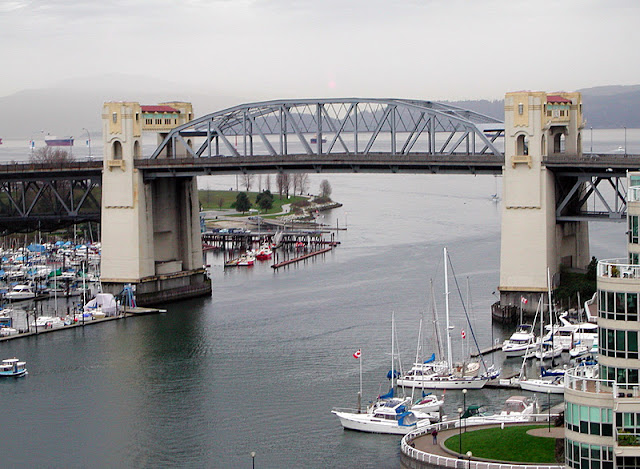 A couple of miles south of the First Narrows, the Burrard Inlet flows for two miles into False Creek. This is a popular recreation area with water taxis, museums, restaurants, etc.

False Creek is crossed by three bridges. The bridge near the mouth of the Creek is the Burrard Street Bridge. As can be seen in the photo, vehicles approach False Creek on short, haunched concrete girders. Next they cross over two  longer, Warren truss spans before crossing over the Creek on the deck of a through Pratt truss that allows smaller vessels passage under the bridge.

What is most notable about this bridge is the elaborate piers on each side of the Creek that include pylons supporting galleries which vehicles drive under when crossing the bridge. The galleries are carefully designed in an Art Deco/Colonial style with pastel colored tiles and a great deal of ornamentation. The  bridge's architect was George Lister Sharp and the engineer was John R. Grant. It was built in 1932 and is considered to be a historic structure.

The deck includes five vehicle lanes as well as narrow sidewalks/bicycle lanes that are partially blocked by the legs of the tower. This has led to a dangerous situation with many accidents. There have been efforts by the City Council to replace a vehicle lane with a bike lane, which has been met with resistance by drivers, store owners, realtors, politicians, etc. It has also been suggested to widen the sidewalks by cantilevering them out over the sides of the bridge, which has also been met with opposition. The land under the bridge is owned by the Squamish First Nation, which has their own concerns about any changes to the bridge.

I think the City of Vancouver has the most politically active populace (especially with regard to bridges) in the world!