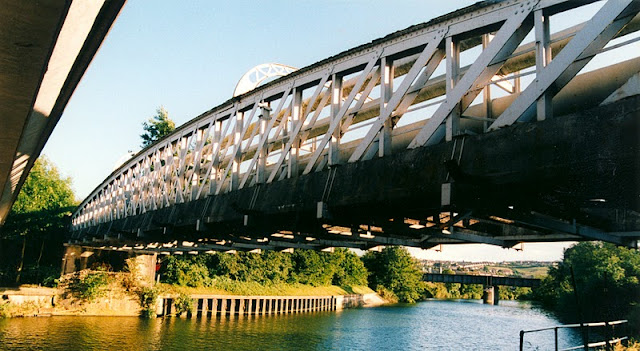 Continuing downstream on the River Avon we come to the two Windsor Bridges. We can see a little bit of the Windsor Road Bridge on the top left corner of the photo. Because of what looks like a sloping exterior girder, I'm guessing that it's a single span, reinforced concrete box girder bridge.  I also know (from Google Earth) that it's a wide bridge with standing vehicles waiting to turn left onto the A4, the Upper Bristol Road.

The other Windsor Bridge must have interested me more (since all my photos are of it). It looks like a utility bridge since it's loaded with cast iron pipes. It's a little bit like the Victoria Bridge because it has diagonal members that slope downward towards midspan where they cross each other. Also it has rods coming down from the deck, supporting the floor beams. And the bottom chord looks like a reinforced concrete beam (?) that matches the concrete abutments. The top chord is curved like an truss arch bridge. It has the same decorative cross and portal braces as the Midland Road Bridge. After looking at the Bridge Spotter's Website, I believe it's a Whipple bowstring truss, in which case the heavy bottom chord would be the bowstring. The website said this design was patented in 1847 by Squire Whipple as a longer, stronger version of the Pratt truss.

Looking downstream we can see the Midland Railroad Bridge, a two-span steel through girder structure. However it hasn't carried a train since 1973 (unless an agreement has been reached to use it as a rapid transit link for Avon Metro). Further in the background are rows of houses along the undulating hillside. This is the town of Twerton. If we continued further downstream, we would come to the Weston Locks from when barges used to carry goods between Bristol and Bath.