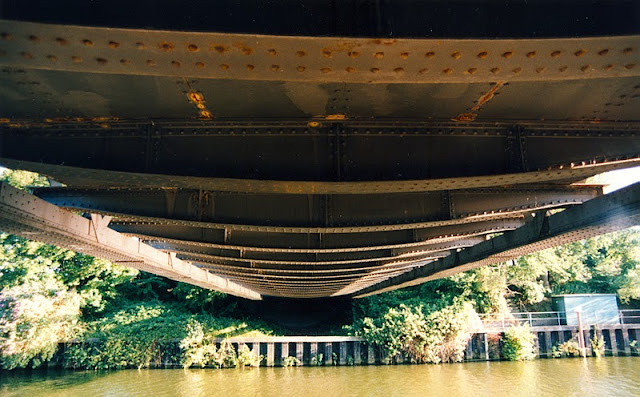 The underside of the bridge is surprisingly clean with just a few rust spots on the soffit. Since the bridge was most probably built before WWII, I would guess it has been rehabilitated.

I found an article on the internet (by someone with the poetic name of Pierre Terre), who said the Midland Road Bridge had been moved from its original location at the Bath Green Park Railway Station. Most likely the bridge was cleaned during the move. Note the use of soldier piles for a quay wall under the bridge. Perhaps the river was wider at it's former location because you can't even see the north bridge abutment behind the heavy shrubbery.

Unlike the underside of many bridges, the underside of this bridge clearly shows how the load is carried.  The beefy, bottom chords not only acts in tension, but they also carrying the floor beams through shear and moment. I like how the floor beams are haunched to better carry the positive moment (and to allow room for the chords). I wonder if the bridge was used to carry trains at its former location?