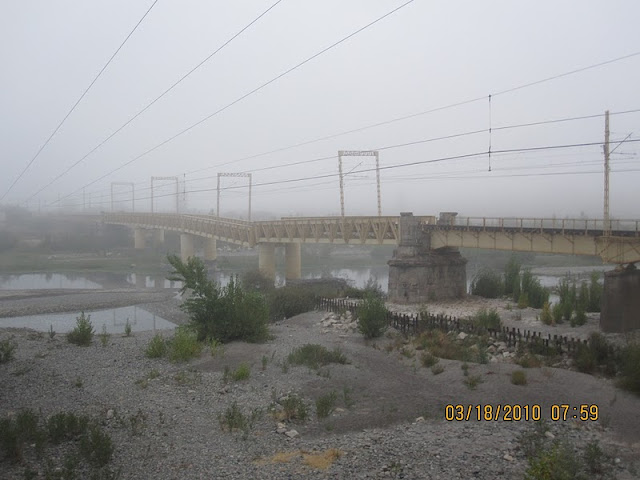 Continuing our tour of railroad bridges in Chile, we come to another Warren truss that had some damage during last month's earthquake. This photo was taken in the early morning and so the bridge is shrouded in fog. Although you cannot tell, this bridge is back on the east side of the Pan American Highway (Route 5). I don't really understand why, but the railroad moves back and forth under Route 5 many times between Concepcion and Santiago.

I am wondering whether the span falling is related to lateral spreading of the river bank (on the far right side of the photo). You can see that the truss has moved to the north, pushing the next span off of it's support. However, it could just as well have been caused by ground shaking. Also, it's hard to tell, but the pier just north of the dropped truss looks like the legs have moved apart. Since I don't see a cap at the top of the columns, I think it's possible. One thing is for sure, the depth of the truss stopped the span from falling to the ground. It looks like it got wedged against the adjacent protruding truss. If this had been a girder bridge, it would have fallen as soon as it was pushed off the pier.