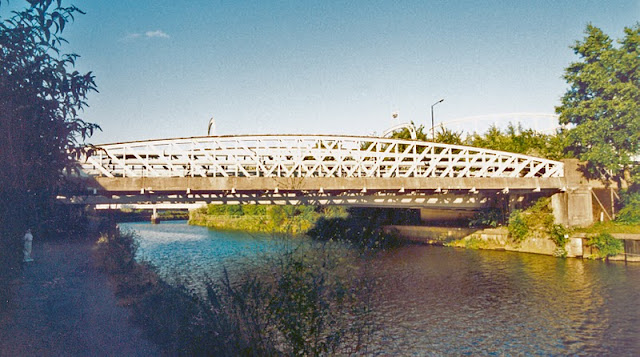 The Windsor Bridges were as far as I walked along the River Avon. I often regret not going a little further, because there is usually a beautiful bridge just ahead. That was true in this case as a gorgeous stone arch bridge carrying A4 across the River Avon was a mile downstream and the amazing Clifton Suspension Bridge is 12 miles downstream.

In this photo we are looking back upstream at the Windsor Bridges and the Gasworks Siding Bridge. The Gasworks are visible on the right bank. It looks like the metal frame around the tank supports it as it rises and falls. I understand that two of the three gas tanks have now been removed.

The Whipple truss (on the closer Windsor Bridge) was considered innovative because the diagonal members crossed two panels. In fact, it is sometimes called a double-intersection Pratt truss. It's not obvious (to me anyway) why this bridge is stronger other than more diagonals means more load carrying capacity. The symmetric arrangement of diagonal members must be popular because the Midland Road Bridge also has them. The Windsor Bridge has a single span of about 200 ft so it's pretty strong. This design was used to carry steam locomotives. I couldn't find much information on this bridge but it looks like an older (maybe 19th century) bridge that was in use when the Gas Works were an important part of the local economy.

Since I never made it farther downstream along the locks to Bristol Channel, we'll turn around tomorrow and revisit a few bridges on our way back to Bath.