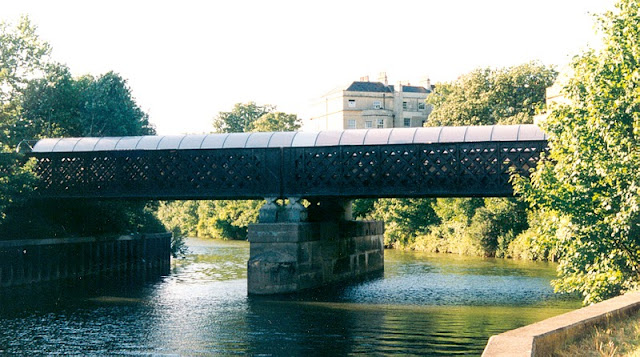 Continuing on our walk along the River Avon to Bath, we arrived at Sainsbury's Bridges. I wish they wouldn't put two different bridges next to each other because it's hard to distinguish each bridge's features. For instance, in this photo, it looks like the bridge in front has a plastic roof, when it's actually on the other bridge.

The structure in front was a railroad bridge that was converted for highway use after the trains stopped running. I would have called it some kind of lattice truss, except they usually have a roof. Maybe the roof was removed when the bridge was converted to vehicular traffic. The bridge is a two-span steel through truss structure supported at midspan on a large stone pier with cutwaters and on seat-type abutments. Note the big rocker bearings supporting the truss.

The other Sainsbury's Bridge is a footbridge supported on three precast I girders. We'll take another look at both these bridges tomorrow.