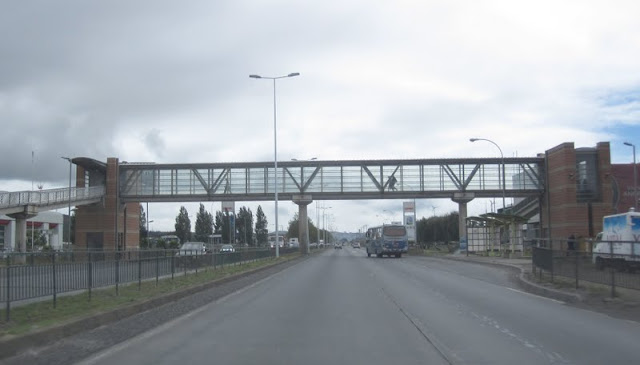 A few blocks further north and we come to another footbridge carrying students from a bus stop to a technical university.

This area between Concepcion and Talcahuano is growing rapidly. My Chilean hosts say that Chile is becoming the wealthiest country in South America. However, there are very mixed feelings about the role the military played in this development. People were uncomfortable seeing the army back on the streets after the recent earthquake.

This POC is an interesting kind of truss that I haven't seen before. It is composed of six 'V's carrying forces between the top and bottom chords with large spaces in between. It has an eccentrically placed single-column bent on the right side of the truss. However, the bottom chord is quite beefy and the truss may be playing a secondary role (carrying the roof).

The two ends of the POC are supported by handsome brick structures that also support the ramps running parallel to the road. It looks like there is a shelter on the first story of these masonry structures. Although the POC isn't terribly exciting, it indicates the city's efforts to provide something more architecturally pleasing through this new commercial district.