The next bridge that was relocated to the Ishibashi Koen is the Koraibashi. This bridge once connected Kajiya-chō and Kōrai-chō, where many of the samurai who later overthrew the Tokugawa shogunate lived (see Google Earth photo below). 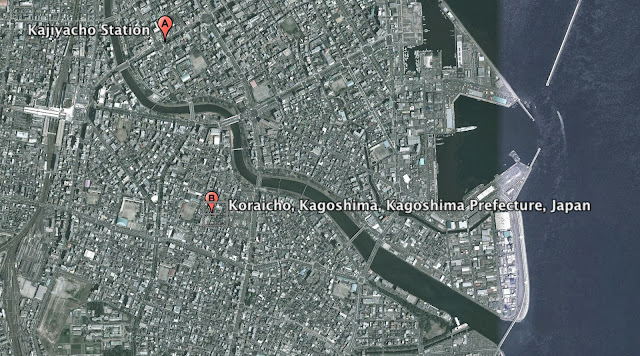 The four-arch Koraibashi (completed in 1847) was the second longest of the five Kotsuki bridges. The cutwaters rose almost to the deck on the upstream side of the bridge and flagstones along the river bed also helped to protect the bridge. Local masons Ryusuke Yamada and Genjiro Tanaka made their names working on this bridge under Iwanaga Sangoro. The photo below shows the Koraibashi as it originally stood across the Kotsukigawa.

Kagoshima Prefecture, Japan's Bridges: 4: Koraibashi in Ishibashi Park by Mark Yashinsky is licensed under a Creative Commons Attribution-NonCommercial-NoDerivs 3.0 Unported License.
Posted by Mark Yashinsky at 9:00 AM