Another view of the Yonahime Bridge that we previously studied on August 12th. It's a long span truss arch bridge that was slightly damaged during the 2007 Kashiwazaki Earthquake. The bearings were damaged and so you can see in the lower left corner that the bridge is now sitting on short steel I girder sections. Apparently this is an adequate temporary fix since the bridge was fully open to traffic with no restrictions when we were there.

In the Google Earth photo below, we can see the white truss members of the Yonahime Bridge carrying Route 8 near the coastline of the Sea of Japan. Further inland is the Hokuriku Toll Road. Both highways appear and disappear as they go through tunnels in the coastal mountains. I'm always impressed by the excellent infrastructure in Japan. 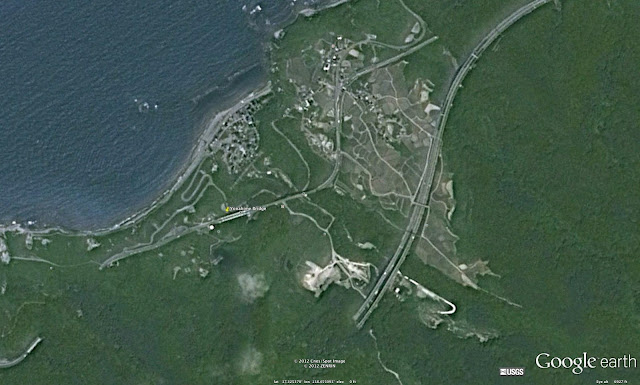 Niigata, Japan's Bridges: Yonahime Bridge on Route 8 (2) by Mark Yashinsky is licensed under a Creative Commons Attribution-NonCommercial-ShareAlike 3.0 United States License.
Posted by Mark Yashinsky at 9:00 AM