Niigata Japan's Bridges: Japan Rail Bridges across the U River (1)

Continuing up the U River from the Osu Bridge are a pair of railway bridges. I wonder if one bridge carries passenger trains and the other carries freight trains? They are both through girder bridges on seat-type abutments and pier walls.  They are much beefier than the road bridges we had previously studied. 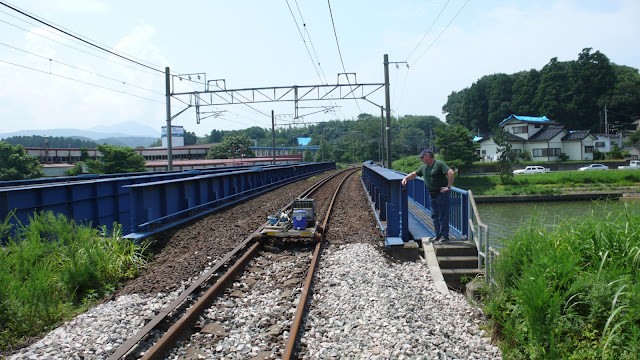 When we arrived on August 6th, a rail crew was re-attaching the rails and there was new ballast on the approaches.  However, they went off to lunch before we could ask them if they were repairing earthquake damage.  The rails were rusty, suggesting they hadn’t been used in awhile, but its possible that the railway was closed due to damage south at Omigawa Station or north at Kashiwazaki Station.  The bridges were built in 1997.

Niigata Japan's Bridges: Japan Rail Bridges across the U River (1) by Mark Yashinsky is licensed under a Creative Commons Attribution-NonCommercial-ShareAlike 3.0 United States License.
Posted by Mark Yashinsky at 9:00 AM