Niigata, Japan's Bridges: Yasaka Bridge across the U River (1)

Walking along the levee from the Rinko Yasaka to the Yasaka Bridge. 'Rinko' means superior or first and so this is the second Yasaka Bridge. Like most of the bridges over the Ugawa, this is a two span, simply-supported river crossing, but with steel girders, and supported on a pier wall and seat-type abutments.  It is about 200 meters upstream from the more heavily damaged Rinko Yasaka Bridge, but the soil was much firmer at this site, there was less than 100 cm of settlement at the approaches, and no damage to the abutments or wingwalls. 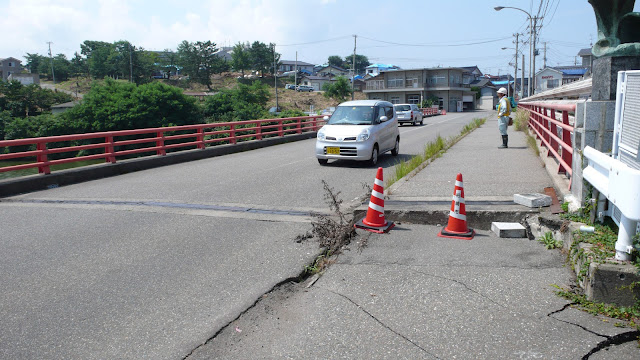 Niigata, Japan's Bridges: Yasaka Bridge across the U River (1) by Mark Yashinsky is licensed under a Creative Commons Attribution-NonCommercial-ShareAlike 3.0 United States License.
Posted by Mark Yashinsky at 9:00 AM