A slightly skewed view of the Toyota Bridge carrying Highway 8 across the Sabaishi River. It is a three span bridge with a single span over the river. In the previous blog we saw that the bridge has a very wide abutment, perhaps for a future widening. 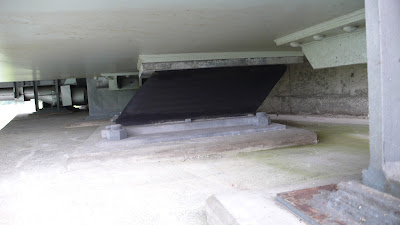 The abutments had quite a bit of movement during the 2007 Kashiwazaki Earthquake. Note that the elastomeric bearings are distorted from the abutment sliding towards the river. You can see that even more distinctly in the photo below of the transverse stoppers that were staggered about six inches. 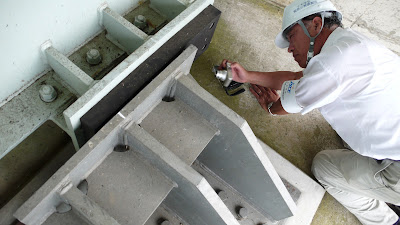 My friends in Japan surveyed the bridge after the earthquake and found that the abutments moved closer together while the superstructure moved slightly to the northwest. 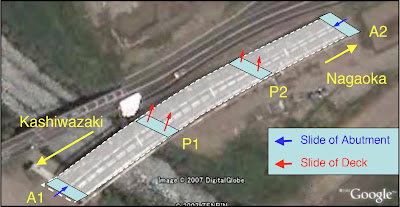 Niigata, Japan's Bridges: Toyota Bridge across the Sabaishi River (2) by Mark Yashinsky is licensed under a Creative Commons Attribution-NonCommercial-ShareAlike 3.0 United States License.
Posted by Mark Yashinsky at 9:00 AM