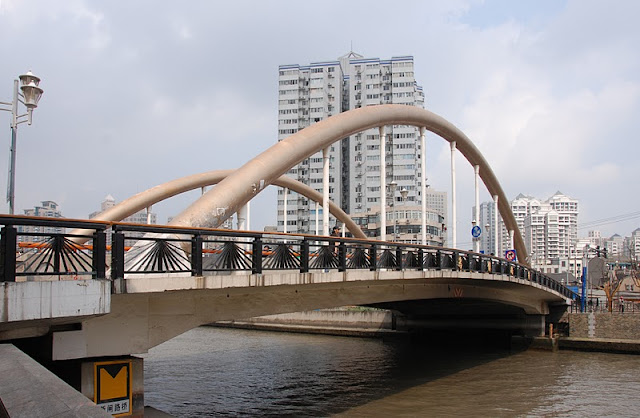 The next bridge upstream across Suzhou Creek is a single span through arch with tubular steel ribs.
The Wuzhen Road Bridge is about 60 m long and 20 m wide. Like the Xizang Road Bridge, it has ramps that carry vehicles onto the bridge and stairways that carry pedestrians from the quays onto the bridge.
Suzhou Creek has an interesting history. In 1842 China was forced to open up to foreign trade. Shanghai became a major port and Suzhou Creek was used to bring goods out from China's interior. The banks became heavily industrialized and the water polluted. In 1998 the City of Shanghai began a project to revitalize the area. There was significant new construction as well as work to preserve historic structures. Pollution was stopped and parks and entertainment facilities were built along the creek.