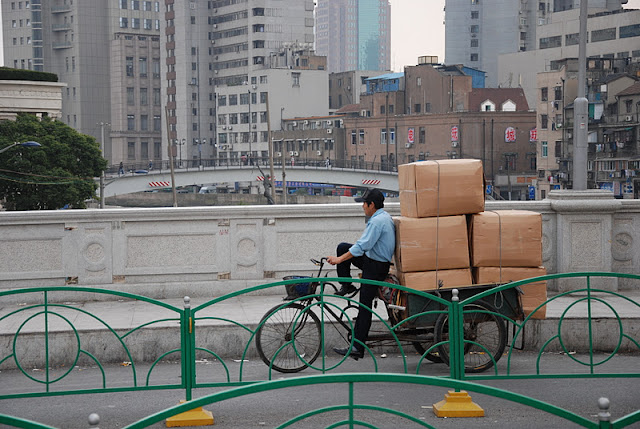 There is so much construction in this bend of Suzhou Creek that I'm a little uncertain which bridges are old, new, widened, or removed. There were no bridges until the 19th century and now there are 28 bridges across the creek, and many were built in the last few years.
Upstream of Henan Road Bridge was a temporary pedestrian bridge that was constructed while the Henan and Fujian Bridges were being replaced. That bridge is now gone and so I didn't include a photo of it.
The new Fujian Road Bridge was completed in 2008. It's 94 m long three span bridge with haunched reinforced concrete girders, probably to match the arched style (historic and current) of the other bridges across this part of Suzhou Creek. It appeared to be used exclusively by cyclists and pedestrians when I took this photo (in October 2008), but its a very wide bridge and so it will probably carry vehicles as well.