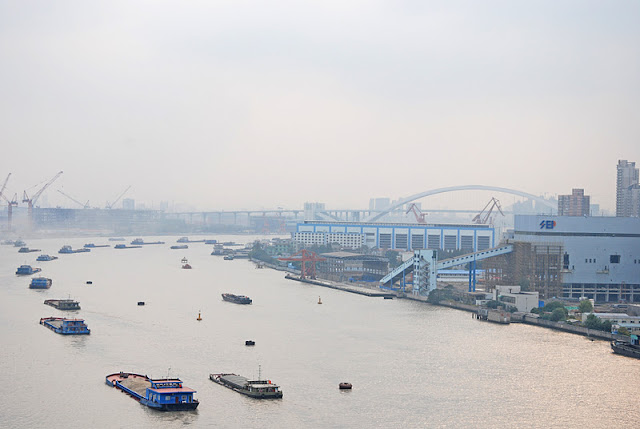 A few kilometers upstream from where yesterday's photo was taken is the Lupu Bridge. This is the bridge I showed when I started my blog on January 26, 2009.
The City of Shanghai had to design and build the world's longest arch bridge in order to cross the wide Huangpu Bridge. While a cable-stayed or suspension bridge can easily span 550 m, this is currently the maximum length for the main span of an arch bridge. However, a bridge in Dubai with a main span of 667 m will be completed in 2012.
The Lupu Bridge is a three span, half-through, tied-arch design. This type of arch bridge was chosen because the soft soil wouldn't be able to support the large thrust of a through arch. Temporary towers were built to support each side of the arch with cables until the final segment joined the two halves together. Cable ties at deck level carried the thrusting action of the arch. The tension in the cables was adjusted before and after the orthotropic deck was built. A good report on the design and construction of this bridge was written by Yue Guiping of the Shanghai Municipal Engineering Design General Institute.