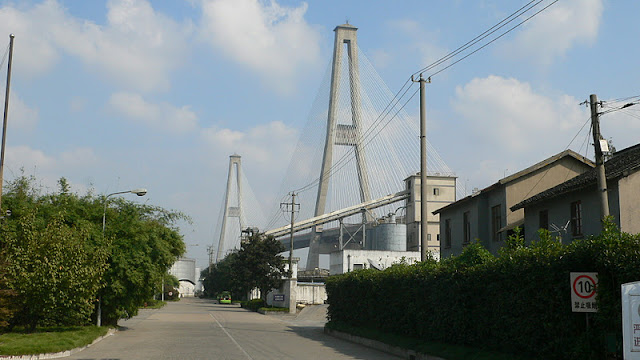 One last look at the Xupu Bridge. I said that all the Huangpu crossings have stairs or elevators that can take pedestrians onto the deck. However, I don't think I found either a quick way onto the deck nor a green park or garden along the riverbank at the Xupu Bridge. It's way out in the suburbs, on a long viaduct, and it has a more impersonal feel than the other Huangpu crossings. Still, it's a nice looking bridge with a pointed cap atop the towers and with green awnings and the bridge's name emblazoned on the tower struts.
There's another cable[stayed bridge being built even further upstream across the Huangpu, but I didn't have a chance to visit it when I was last in Shanghai (in October 2008).