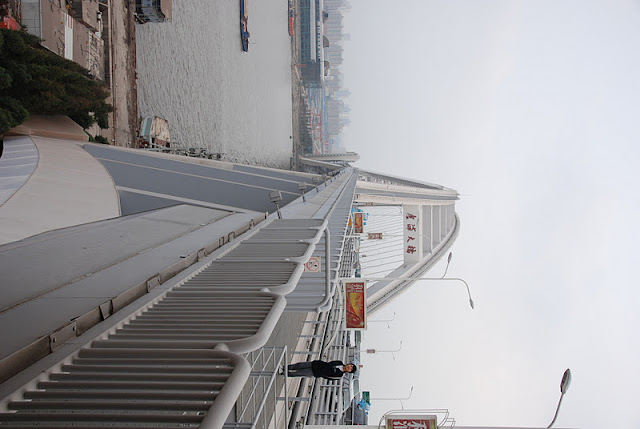 This is the view looking north at the Luwan District of Shanghai from the top of the eastern arch of the Lupu Bridge. Although the main arch is 550 m long, it is also part of a 3,900 m long viaduct. A long viaduct is necessary to bring the approach high enough so the arch bridge can avoid river traffic and also to allow traffic to speed above city streets on an elevated expressway.
Construction activity is going at a rapid pace under the bridge as Shanghai prepares for the 2010 World Exposition. Hopefully, all of the effort and money spent on this 'World's Fair' will bring rewards to the people of China and the people of Shanghai. My impression was that the sacrifices for last year's Olympics in Beijing were not sufficiently appreciated or of much benefit to the people of China. I guess such sacrifices are a part of the process of opening up Chinese society to the world.
I know for myself that in the past I was never invited to visit China as an engineer, while I was frequently invited to attend conferences during the great economic boom in Japan. Now, I'm often invited to attend conferences, workshops, and symposiums, and to talk to my Chinese peers.
This is the first bridge that I have shown with four different photographs on my blog. I guess the Lupu Bridge is a little like an elephant. It looks like a totally different creature, depending on where you are standing and what you are looking at.