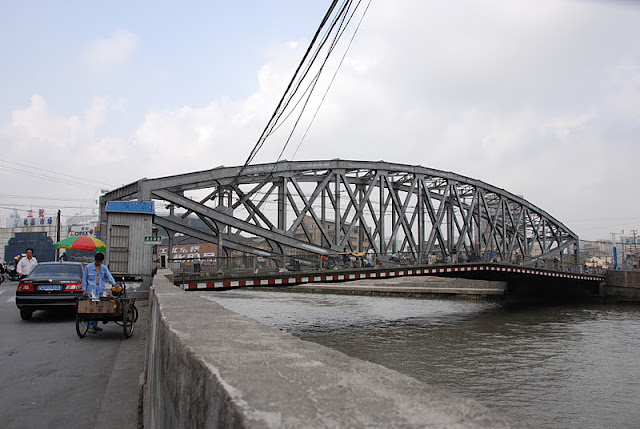 We previously looked at a lenticular truss bridge in Pittsburgh (Gustav Linderthal's 1883 Smithfield Street Bridge). This type of bridge became popular at the end of the 19th century. The top chord is like an arch that carries the deck in compression. The bottom chord is like a suspension cable that caries the deck in tension.
The Zhejiang Road Bridge was completed in 1908 and strengthened in 1975. It's a single span lenticular truss bridge across Suzhou Creek. It's only 15 meters wide and includes wide sidewalks and two narrow vehicular lanes.
This bridge, like the Zhapu Road Bridge, was featured in street scenes of Shanghai in the movie Empire of the Sun. That film did a nice job of showing the life of privilege of the colonialist families and the deprivation of the Chinese people prior to the Second Sino-Japanese War.
This photo provides a good view of Suzhou Creek. For many years the creek was highly polluted. The City of Shanghai looks at the creek as an important resource and has worked hard to clean it up. Today there are several species of fish, turtles, and other riparian creatures and the creek is no longer black and smelly.