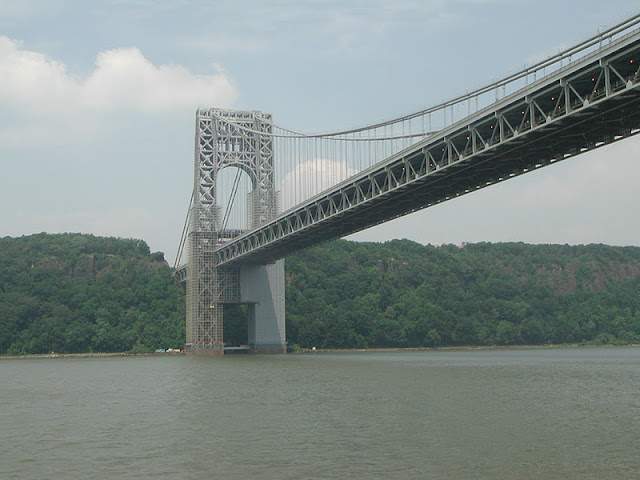 One last look at New York City (well, New Jersey actually) and the George Washington Bridge. This photo (taken in 2002) shows preparations for painting the bridge's west tower. The tarp around the scaffolding may be required to prevent lead-based paint from entering the river. The steel towers are composed of arches above and below the bridge deck. The green cliffs behind each tower makes the bridge more attractive.

When the bridge was first built, the deck was supported by very thin (twelve-foot deep) plate girders under the roadway. The theory was that the enormous mass of the long deck would act as a stiffener to prevent large movements during windstorms. It may have been fortunate therefore, that they later put a lower deck on the bridge with a deep truss.

We've looked at every river crossing connected to Manhattan, but there are many other interesting bridges in the area. The Bayonne Bridge (1931), the Bronx-Whitestone Bridge (1939), the Throgs Neck Bridge (1961), and the Verrazano-Narrows Bridge (1964) were all designed by Othmar Ammann during the golden age of bridge engineering for New York City.