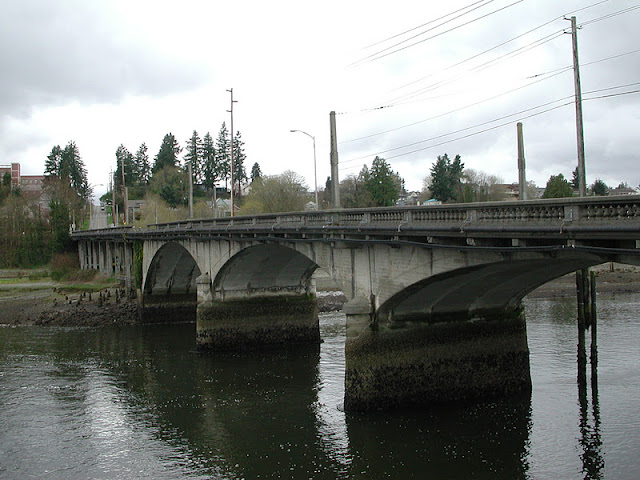 The Fourth Avenue Bridge was built in 1920 across the southern end of Puget Sound. The east spans were earth-filled concrete arches while the west-approach structure was two parallel, 15 simple-span reinforced concrete slabs with stubby ‘T’ girders separated by a longitudinal expansion joint. The approach was supported by three-column bents that were split for longitudinal movement in the bent cap. The outside columns had a 24” by 24” section and a flare turned longitudinally while the center column had a 28” by 28” section and a flare turned transversely. The columns were connected with longitudinal and transverse struts.

Like many of the bridges that were damaged by the 2001 Nisqually earthquake, the Fourth Avenue Bridge was an old, deteriorated structure that was already scheduled for replacement when the earthquake occurred. The reinforcement had corroded, expanded, and caused the concrete to spall from the bents. In fact, this bridge was damaged by earthquakes that struck the region in 1949 and 1965. The Nisqually earthquake was the final event that caused its closure until a replacement bridge was completed in 2004.