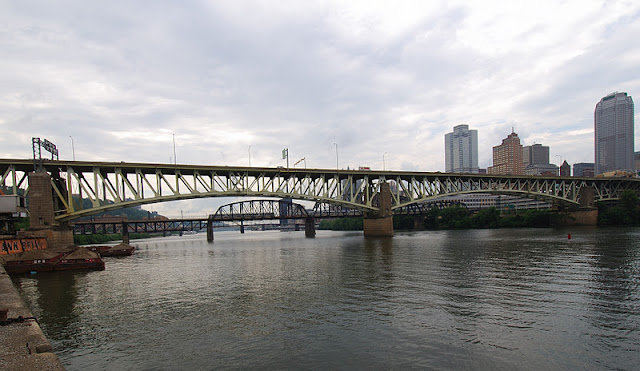 The Liberty Bridge is called a cantilever truss but it looks like a truss arch. A cantilever truss is build from both sides until it meets in the middle.   However, truss arches are often built as cantilevers, but after they're constructed they support the load by arch action.

Since I'm writing about arch bridges across the Monongahela River, I wanted to include the Liberty and the Smithfield Bridges, because they have some characteristics of an arch.

Liberty Bridge was built between 1926 and 1928 (along with a pair of tunnels) to carry traffic from the factories in downtown Pittsburgh to bedroom communities south of Mount Washington.  Pittsburgh is like a bowl; with trams, tunnels, and bridges to help move people in and out of the city.

Liberty Bridge is a 2663 ft (811 m) steel viaduct that includes two cantilever spans over the Monongahela River on concrete piers faced with stone.  The bridge provides 44.4 ft (13.5 m) vertical clearance over the river. It was the longest, tallest and most expensive bridge in Pittsburgh when it was built.